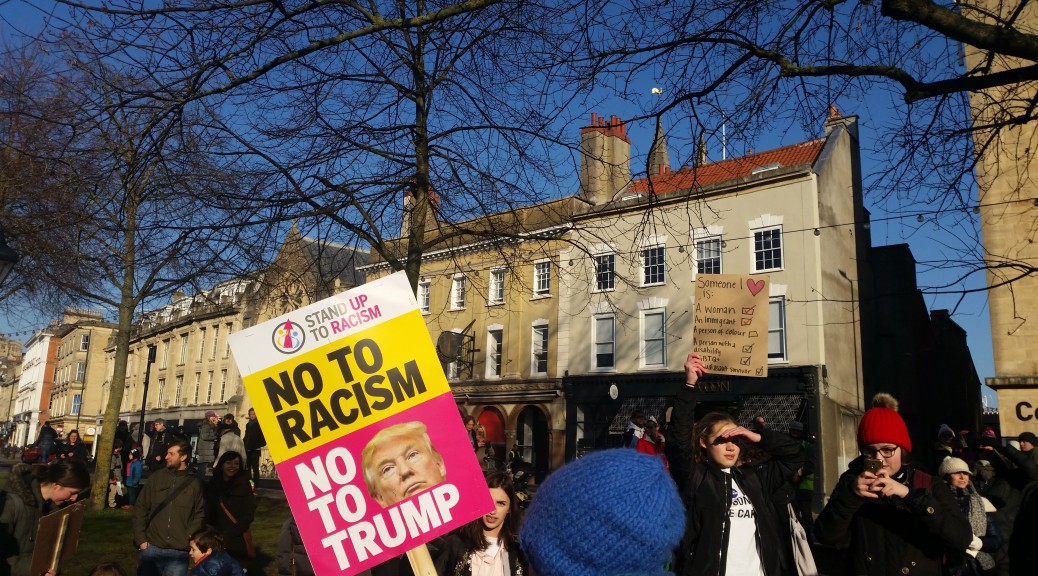 ‘Why we March? Because the Most Powerful Man in the World says its Ok to Assault Women’…

“Pussy grabs back” was the message millions of demonstrators had for newly-inaugurated President Donald Trump during Women’s Marches around the world on  Saturday January 21, 2017. Feminist marches took place in locations as far-flung as Antarctica on Saturday, with protesters declaring “girls just want to have fun-damental rights.”

These were a result of Trump’s divisive election campaign rhetoric, an attack on Fox News host Megyn Kelly and a recording of him boasting of famous men being able to grab women “by the pussy” all fed into the protests. Some 500,000 people took to the streets of Washington DC and the total reportedly was as high as 2.5 globally.

I joined them here in the UK as I marched – or more of a gentle stroll if I’m honest – round sunny central Bristol with a lovely bunch of women, plus men and children too. It was one of hundreds of such marches round the globe in a show of global solidarity.

The Women’s March on Washington and its Sister Marches or solidarity marches was a worldwide protest, in support of women’s rights and other causes with a notable exclusion of abortion rights but including the right to wear hijab, immigration reform, health care reform, protection of the natural environment, LGBTQ rights, racial justice, and workers’ rights. The rallies were also aimed at Donald Trump, immediately following his inauguration as President of the United States, largely due to his statements and positions on the above causes.

The first protest was planned in Washington, D.C., and is known as the Women’s March on Washington. It was organized as a grassroots movement to “send a bold message to our new administration on their first day in office, and to the world that women’s rights are human rights”. The march drew at least half a million in Washington, and some estimates put worldwide participation at 4.8 million.

Then on Monday Trump’s first act of office was to sign a ‘Global Gag Act’ – surrounded by just men – banning the US government from giving funding to health groups that offer abortion counselling. The President signed the order which denies US foreign aid to groups who “perform or actively promote” terminations. Effectively stopping $600m of funding any international development groups which even give women or girls overseas advice on abortion. It is set to hit women of colour and low income hardest and health workers have warned it will inevitably cost lives. As the United States spends that each year on international assistance for family planning and reproductive health programs, making it possible for 27 million women and couples to access contraceptive services and supplies.

However, by Thursday the Dutch Government had announced they would set up their own abortion fund for international aid organisations who will lose funding under his new policy. Their government says between 15 and 20 countries across Europe and Asia have expressed interest in joining the fund and making donations. Yet, while the Dutch have been leading on this issue, the British have been conspicuously silent. In fact Theresa May was in the US to meet the new president, however rather than call him out on his actions to restrict reproductive rights, she was offering flattery about the “special relationship”.

After the march, officials behind the organization reported 673 marches took place worldwide, including 29 in Canada and 20 in Mexico, The Women’s March crowds maintained peaceful interactions with the police. Following the march, the organizers of the Women’s March on Washington posted the “10 Actions for the first 100 Days” campaign for joint activism to keep up the momentum from the march.

So what are our Actions? It is an important time of change in the world. Brexit and now Trump are part of a movement of conflict and division taking place across the world. It’s significant that women are taking a lead in standing up to its divisive rhetoric and acts.  Here at Sustain-Live we want to be part of that movement and support women to work together to be part of the solution.

As part of this, with a group of women, we are working to develop Catalyse Change CIC a new Bristol-based social enterprise supporting teenage girls to develop sustainability skills and knowledge for ‘healthy, happy and green’ communities, careers and planet. Our mission is to ‘ignite the ambitions of girls with the skills and belief to catalyse the change they want to see in the world.’

We are developing a pilot programme to work with young women to be change agents for sustainable development, through; inspiration, awareness, education, mentoring and practical skills.  We aim to fill the gap in the sustainability advice and skills currently being offered to teenage girls in schools.

If you have any resources or skills you can offer – or if your daughter or school would like to find out more – then please get in touch, we would love to hear from you.

Lets find ways to channel our anger into something productive, let us know if you want to help us to Catalyse Change.

To find our more or get involved contact us. 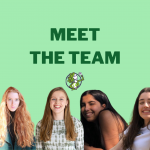 Our Hopes for The Climate Crisis
January 6, 2021 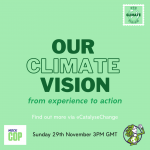 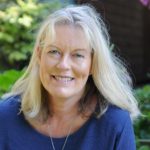 Helen Taylor has joined our Board
September 1, 2020 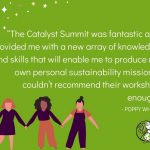 Thank You for Joining Us!
July 30, 2020
Tweets by CatalyseCh

Keep up to date
We use cookies to ensure that we give you the best experience on our website. If you continue to use this site we will assume that you are happy with it.OkPrivacy Policy